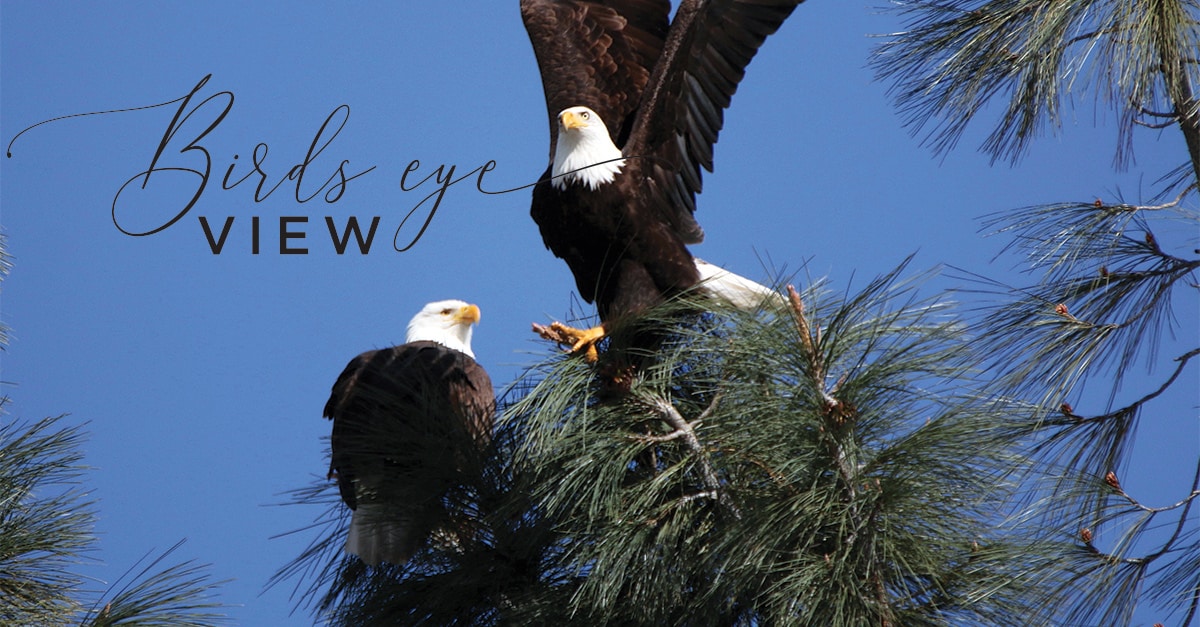 Watching the Eagles at Turtle Bay with Terri Lhuillier…

Terri Lhuillier, pronounced Lu-WILL-yer, greets passersby on a southern stretch of the Sacramento River Trail that runs alongside the westbound lanes of Highway 44. Beside her stand a pair of photographic tripods, one bearing a camera with a long lens, the other a spotting scope. Both lenses are aimed at a bare, shattered treetop 100 yards or so to the northwest. A retired elementary school science teacher, she invites the public to peek through the scope.

Those who take her up on the offer can see perched on the distant tree a Haliaeetus leucocephalus, pronounced American bald eagle. This one is named Guardian, the male mate of Liberty, who waits in a nest not visible from this vantage point with a pair of month-old eaglets named Star and Sentry. Wellknown in Redding, Liberty first chose this nesting area in 2004 where she paired with the first of her mates, and has returned every year since to this area to raise a new family.

Lhuillier saw it all. “I’ve been a documentarian of these eagles for 18 years,” she says with a smile. “Eagles live for five years before breeding, so Liberty was probably five years old when we first saw her. Guardian is her third mate, and he is much younger, we figure eight, since when he showed up with Liberty in 2019 he still had a dark mark near his eye, which is indicative of a young bird, and usually the
last part of the head that turns wholly white.”

Her documentation began as entries on an online forum hosted from British Columbia. Back then, Lhuillier marveled at the eagles with her husband and son while walking their dog. A few years later, she countered plans by Caltrans to drive the eagles off so they would not be disturbed during a construction project alongside Highway 44. “That’s when I became more than a watcher,” she says. “How can you deter our national bird nesting in the middle of the city? There are laws against that.”

She produced a children’s book about that 2007 incident titled “The Unstoppable Eagles,” co-written with her sister and illustrated by her niece. In the end, the eagles stayed, the construction completed and Caltrans installed a camera fed by fiberoptic cable, powered by photo cells and aimed at the nest. She went on to found the nonprofit Friends of the Redding Eagles to fundraise for maintenance of the EagleCam, and to promote education and conservation of bald eagles.

The Eagle Lady remembers well the first time she sighted one. “It was February 22, 1992, right here at Turtle Bay, when I saw my first bald eagle,” she recalls. “I leaned back on a rock and watched it. The dark body, the white head, the white tail feathers fanned against a deep blue sky – it just mesmerized me. To this day, seeing a bald eagle soaring has the same effect on me.”

Fellow eagle enthusiasts express similar awe. “Watching them in their natural environment is breathtaking. They’re so regal, so majestic,” says Sue Wolf, who met Lhuillier during a Friends of the Redding Eagles tour. “It’s amazing to watch how careful they are with their babies. These are raptors, aggressive hunters, but once a fish is in the nest, they take off pieces and so gently put them in their mouths.”

Wolf says it was the people on the path who gave Lhuillier the nickname Eagle Lady, because she is out there so often with her scope and camera. On a rare day she isn’t, she wants to catch up. “She called last night for report,” Wolf says with a chuckle. “Terri is amazing. She is a wonderful caring soul who cares about wildlife. When she’s on the river trail, she always has a garbage bag with her, and if she sees any trash on the trail she’s picking it up.”

Last year, Friends of the Redding Eagles upgraded to an EagleCam with pan, tilt and zoom features that can be controlled by a volunteer moderator stationed anywhere in the country. A recent upgrade added sound and infrared, which allows 24-hour visibility. The lives of Liberty and Guardian and eaglets Star and Sentry are a show for the whole world on the Friends of Redding Eagles YouTube channel, with a live chat posting reactions to their every move.•