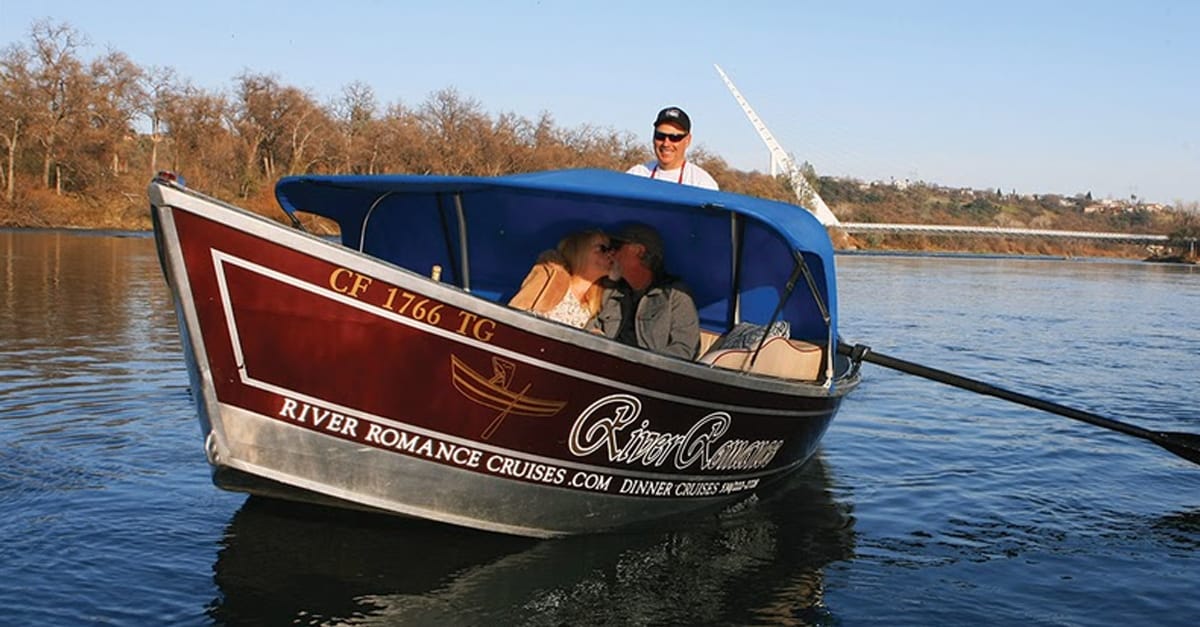 Imagine drifting down the Sacramento River and seeing a bald eagle swoop over you, trying to catch a fish. It’s nearing sunset and you’re peacefully going down the cool, swaying waters, taking in the surrounding beauty. The experience is something you’ll never forget, made even better with a loved one at your side.

One of the best ways to take in the flora, fauna and surrounding snow-capped mountain peaks of Northern California is from the Sacramento River, and River Romance Cruises provides a way for locals and visitors to comfortably experience the magic of the river any time they choose.

River Romance Cruises is managed by seasoned angler and romantic-at-heart Todd LeBoeuf. Growing up in the Bay Area, Todd remembers fishing with his grandparents out on the Delta around the time when he learned how to walk. Todd fell in love with fishing and bought his first boat when he was just 12 years old.

“It was a Montgomery Ward 12-ft. aluminum boat. I had a boat before I had a car,” Todd says. When he got older, Todd moved to Redding for all the activities that the North State has to offer, such as fishing, hunting, camping and hiking, and eventually ended up on the Sacramento River in his buddy’s drift boat.

Todd started fishing more on the Trinity and Sacramento rivers and launched Tiger T’s fishing guide service in the late 1990s. Then in 2001, his friend expressed interest in selling his Sacramento River-based romance cruise business and Todd jumped on it.

It was through River Romance Cruises where Todd met his wife Linnea, but not in the way you’d expect. Looking for the best ways to promote his newly acquired business, Todd turned to the Bay Area Yellow Pages. His account manager, Linnea, was curious about the unique venture that this Northern California fisherman was pursuing.

“I thought, ‘What kind of man would run a romance river cruise business?’” Linnea says. As she coordinated the ad and communicated with Todd, not even knowing where Redding was on the map, the pair got more serious and married a year later.

“The dinner cruise brought us together,” says Linnea, now office manager of River Romance Cruises. “It’s a business where we put smiles on people’s faces. They absolutely love it – it’s fun to see them get off the boat because they’re like noodles because they’re so relaxed,” she adds.

A three-hour dinner cruise starts at the Redding Rodeo Grounds above the Sundial Bridge, and groups sit in a comfortable drift boat with a canopy that separates the group from the gondolier. Guests generally amble downstream for about an hour before pulling off over on an island to have dinner. The crew cooks and serves a meal usually consisting of a choice between teriyaki or lemon pepper chicken, ribeye steak or salmon served with a baked potato, salad, vegetables, garlic bread and chocolates for dessert. After dinner, the group continues to meander down the river as the guide points out beautiful structures, native plants and wildlife during the trip. People regularly see ducks, geese, hawks and bald eagles flying above and around the water as well as deer, raccoons, skunks, otters and beavers along the river’s banks.

“You never know what you’re going to see out here,” Todd says. He adds that every trip for him is different – he meets people from all over the world, taking them out for girls’ days, family reunions and special wildlife tours. He’s also personally witnessed around 75 marriage proposals. “Everyone said yes, thank God,” he says.

However, his most memorable experience was when he and Linnea got married.

“Linnea got in a boat and came to me (at a location on the Sacramento River) and then she said yes, and we floated off into the sunset,” Todd says.

River Romance Cruises are available all year long and every season brings a different aspect to make it a one-of-a-kind trip. “It’s perfect for birthdays or anniversaries and it gives people something to look forward to,” Todd says. •