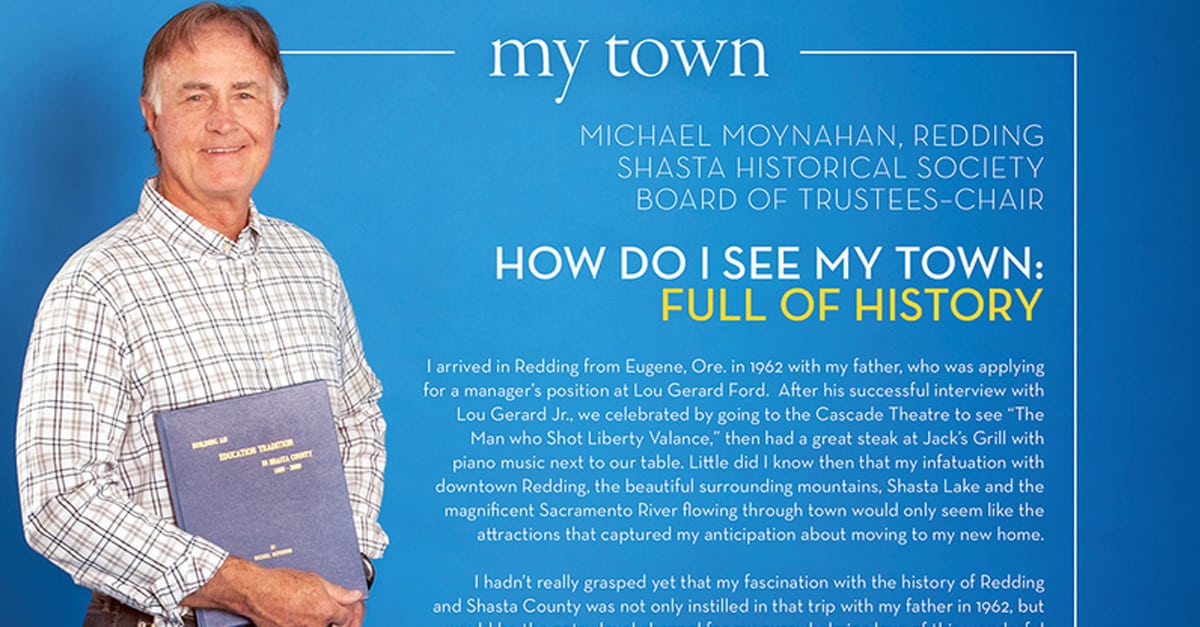 I arrived in Redding from Eugene, Ore. in 1962 with my father, who was applying for a manager’s position at Lou Gerard Ford.  After his successful interview with Lou Gerard Jr., we celebrated by going to the Cascade Theatre to see “The Man who Shot Liberty Valance,” then had a great steak at Jack’s Grill with piano music next to our table. Little did I know then that my infatuation with downtown Redding, the beautiful surrounding mountains, Shasta Lake and the magnificent Sacramento River flowing through town would only seem like the attractions that captured my anticipation about moving to my new home.

I hadn’t really grasped yet that my fascination with the history of Redding and Shasta County was not only instilled in that trip with my father in 1962, but would be the entry-level channel for my overwhelming love of this wonderful community. I attended Enterprise High School and was immediately enchanted with my new school. I was particularly intrigued by my U.S. History class with Don Moore and later my American Problems class with Rod Ash. A presentation by guest speaker Judge Richard B. Eaton was not only fascinating, but his augmentation to local history inspired my family and me to venture out and visit, research and discuss many historically prominent places: Shasta Dam, Old Shasta, French Gulch, Pierson B. Reading’s homestead, the Tower House, Horsetown, the Diestelhorst Bridge, Pioneer Baby’s Grave, Fort Crook, the Dersch homestead, numerous cemeteries and many other infamous spots that garnered our attention.

I gained my bachelor’s degree from Chico State University in history and was hired to teach American Problems at Enterprise High School, where I taught for 32 years. Sixteen years after moving to Redding, I bought my first and only home, which was built in 1936. The fact that the Cascade Theatre was built in 1934, Jack’s Grill in 1935 and my home, built a year later, seemed to postulate the fact that my future

in the area was hanging in the balance.

My love and respect for the people, culture and history of the area permeates through the incredible vitality and zest of our community and has continued to add to the present culture in a provocative and eminent manner. It is only enhanced by

devastating events like the Carr Fire. History is a ubiquitous term that allows us to realize that yesterday has created our today.

It’s certainly a requiem of circumstances that flashes before me, especially now, when I remember back when I read the names at the Enterprise High School graduations for many years, when one student shouted out at the conclusion of the ceremony,“Mr. Moynahan, you’re history.”By the way, I have always taken that as a compliment.