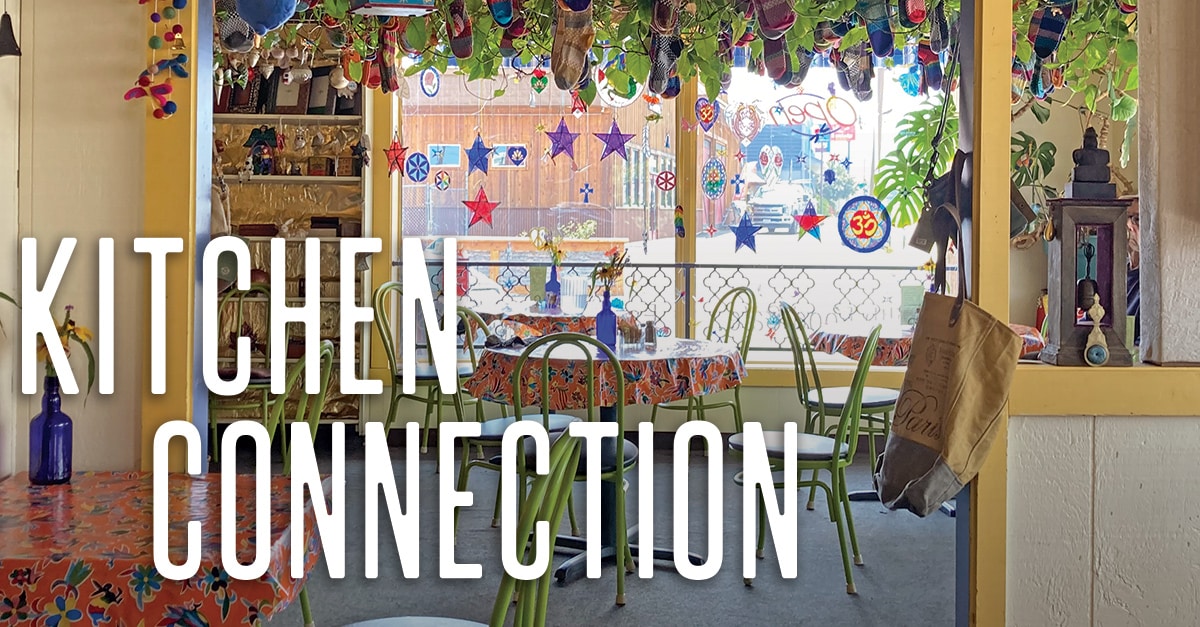 Welcome To Nature’s Connection in Yreka…

Like any major thoroughfare in the United States, Interstate 5 is lined with familiar logos, restaurants and truck stops catering to a generic grab-‘n’-go culture of convenience. But venture just a minute or two off the interstate in Yreka and a healthy, eclectic gem awaits. “We try really hard to make good food and be a little bit of a bright light along the freeway,” explains Flannery Clouse, one of the owners of Nature’s Kitchen, a restaurant and health food store that’s been serving Yreka in some capacity since the 1970s. Originally a bakery, it’s been a depot of holistic offerings for more than two decades. “We’re kind of a five-ring circus. We have the cafe and probably the best selection of vitamins, minerals and supplements in Siskiyou County. We have a bakery where we bake everything and we have gifts.”

Clouse and her sister Patricia, who is also her business partner, tend mostly to the front of the house. Clouse’s husband Cliff runs the kitchen. “We went into business with friends and family and I’m not saying everything’s always perfect, but we’ve been here 24 years. We’re still speaking. We still love each other. So, that’s about as good as it gets.” The fourth member of the longtime partnership is Rajiv Hotek, the original owner. “He had started this place back in the 1970s as a bakery then sold it. Then he and my sister and I bought it back in 1997 and we’ve been here ever since.” Recently, Rajiv retired from the main operation of the restaurant but remains committed to its success. “Rajiv still bakes all of our own bread with organic whole wheat that is all locally sourced.”

While not fully organic, the restaurant tries to offer as much organic fare as possible. “We have all-organic coffee, all-organic chicken, organic greens for our salads,” Clouse notes. “We make our own bread. We’re also kind of known for our house-made quiche. My husband studied pastry making in Europe so he’s very good at it. He makes different kinds every day, as well as the soups and other specials we have. The menu isn’t fancy, but it’s healthy and tasty.”

Food isn’t the only way Nature’s Kitchen seeks to nourish the soul. “We want to make people feel like we’re welcoming them into our own home,” says Clouse. In fact, from the first step through the door, Nature’s Kitchen is filled with personal touches. Artwork, local and unique goods line the walls and shelves. Live music often fills the room and diners and staff banter with each other like old friends – probably because many of them are. Cozy socks for sale dangle from the ceiling, colorfully intermixed with sprawling plant vines that bring a vibrant sense of life to the dining area. Clouse notes, “There’s not a plastic flower in the place. Some of the plants have been here since the beginning, so they’re old and venerable. They give us oxygen and we give them carbon dioxide, which seems to be a fair exchange.”

Other personal décor of note is a tribute wall that keeps watch over the dining room. “There’s a wall of world religious leaders, gurus and saints. None of us here have a particular position on anything. But Rajiv has spent a lot of time traveling in India and so a lot of those photographs are his. And the thing that’s important to me is they all hang at the same height. It’s kind of like the UN of flags, with these holy ones helping us to be our best people. For me, I think here are a lot of paths to the top of the mountain. So we like to honor them all.” Clouse also notes that while many of the faces up there are globally recognizable, from Jesus to Mahatma, some locals also share space on the wall. “Charlie Tom, the old medicine man from the Karuk tradition is up there. My mom’s up there. She was a lovely, charming woman who left us too soon.”

Nature’s Kitchen is “kind of the only game of this sort in Yreka. Maybe we would fit better in a sense in Mt. Shasta, but my sister and I were both born here. We love it here.” That love of home and place is something Clouse works hard to pass on to her customers every day. “I think if you do something well enough, you rub shoulders with magic, and that’s where you find the joy.”•