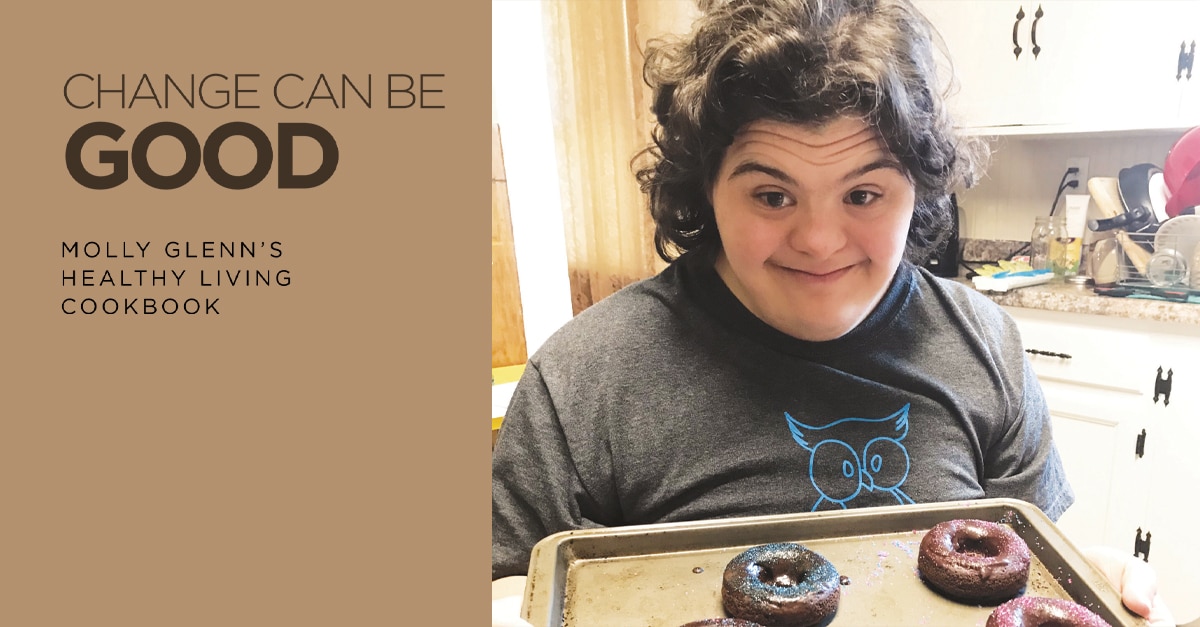 Sometimes, it’s the little things. Just ask Molly and Carolyn Glenn, who have managed to become healthier and lose weight by making a few substitutions replacing carbohydrates in their diet. “One of the things that really changed Molly’s life was Miracle Noodles. She would eat spaghetti with her dad’s homemade spaghetti sauce every day, but it’s high in carbs,” explains Molly’s mother, Carolyn.

Molly was born with Down syndrome. Then, at 19, she was diagnosed with diabetes. “About a year and a half ago, I realized Molly was drinking a lot of water and she didn’t like to drink water. When I took her to the doctor, her fasting blood sugar was over 400 (normal is 99 or below). Her diet had been full of white rice and spaghetti and ice cream, and so we set about to get really committed to a better diet for Molly,” Carolyn notes.

Molly, who lives independently with the help of Compass Supportive Living Services and Independent Living Services, began experimenting with recipes. “We started researching recipes and cooking these different things,” Carolyn explains. Molly began using almond flour and cauliflower for fried rice. Other substitutions included monk fruit as a sweetener and finding a low-carb option for pizza, peanut butter cups and keto fudge. The change in diet was felt throughout the entire family. “When I first started doing it, my aches and pains went away, and I felt like I had more energy,” Carolyn says. Even Molly’s caregivers noticed a difference in her behavior. “Her teachers said she was less fussy and more cooperative. And that all started when her diet changed,” explains Carolyn.

That’s when the idea behind Molly’s Healthy Living Cookbook was born. “One day Michael at Compass said, ‘You know, there are a lot of Compass clients that could benefit from some of these recipes because some of them also have diabetes.’ So, we got the idea that we should make a cookbook.” The Glenns put together a bunch of Molly’s favorite recipes and hand-laminated them and put them together with binder rings so recipes could be added down the road. What they didn’t expect was the overnight popularity. “We did the cookbook and we had a party and there was an article written, and then I started getting requests for copies of the cookbook from all across the country. We didn’t have a distribution mechanism set up or anything like that so we’re not trying to promote the cookbook.” Carolyn is quick to add with a chuckle, “Maybe we’ll explore that when I retire.”

Even though Molly is not currently doing large-scale distribution of the cookbook, Carolyn says the internet has been a huge source of inspiration for those interested in making lifestyle changes, especially the site alldayidreamaboutfood.com. She also stresses that little changes go a long way – and she and Molly are living proof. “It really pays off to make healthy choices. The doctors tell you that all the time, but most of us are in denial about our choices. But when you do make a few and you notice the difference, then you realize, the food that you eat really does make a difference in how you feel when you wake up in the morning.” When asked about her current favorite food, Molly didn’t hesitate: “Spaghetti tacos!” Carolyn laughs. “That will definitely make it into the next recipe book.”