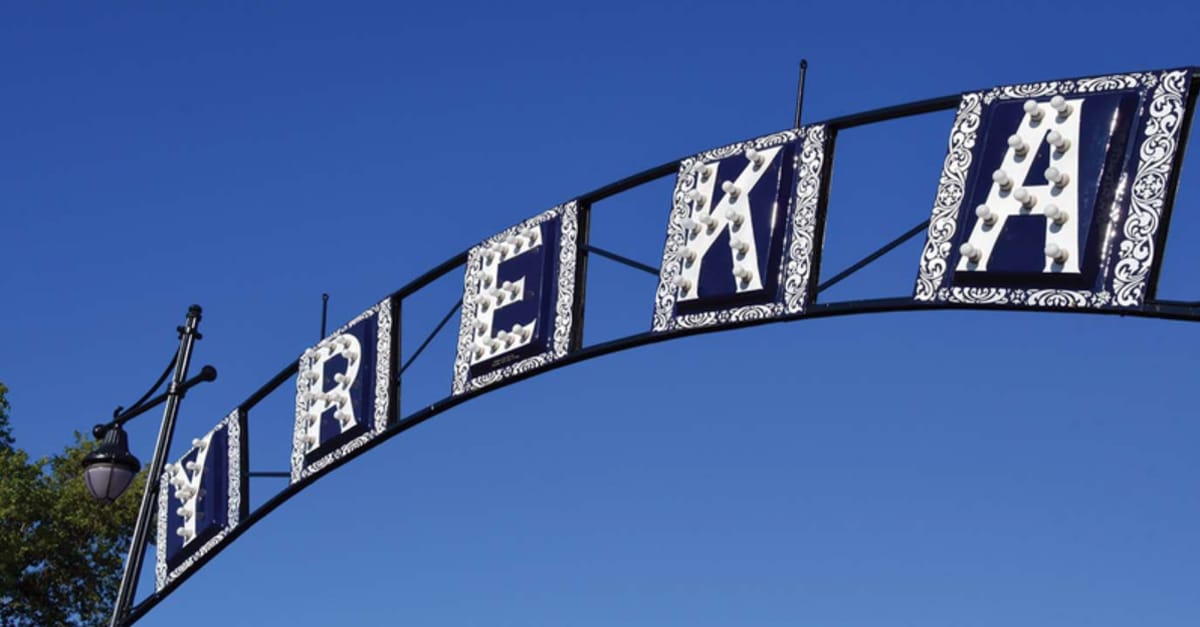 In 1891, the first “electric spectacular” was installed in New York City – a 50-foot-high by 80-foot-wide outdoor sign containing 1,457 attention-grabbing lamps. Soon after, night display advertising spread like wildfire, igniting the distinctly American era of illuminated signs. The merchants of Yreka jumped on the bandwagon and purchased a sign from the Federal Electric Company of Chicago. They gave it to the city and installed it in June 1917. At the time, the arched sign cost $300 (the equivalent of about $6,700 today) and displayed Yreka’s name in lights at the corner of Main and Miner Streets.

“Arch signs welcomed visitors, advertised the town and instilled a sense of pride in their community, showing that the city was progressive. Yreka was halfway between Portland and San Francisco and was a stopping place for many travelers. It was only appropriate that Yreka have a sign,” explains Joan Favero, a longtime Yreka community member who has been involved with the sign’s preservation over the last four decades.

But as two-lane roads gave way to wider highways, arched signs became obsolete. “So many of the signs that were all along old Highway 99 were just taken down and forgotten about or taken to the junk pile because it would have taken quite a bit of restoration to expand over the street with the widening of the highway,” notes Favero. Yreka’s sign was no exception, getting taken down around 1935 and abandoned in a maintenance yard.

For decades, the sign sat collecting dust until it was rediscovered in the mid-1970s. “Brian Meek and David Simmen first brought it to the Soroptimist club’s attention. That it had remained there for 40 years without anyone taking it to the dump was miraculous. But it was in really bad shape,” Favero says. As a Soroptimist, Favero volunteered to take the lead on a community effort to get it restored in time for the American Bicentennial in 1976. “We had quite a few people in town who donated their time. Harry Bryan did the main engineering on it. Earl Skinner did the welding. Don Hume gave us the bases, Norman and Rosa Lee Baguley did the painting, Mike Moulder did the electrical and Frank and Jean Rizzo donated the light poles to suspend the sign, which were old Yreka light standards. It took us a long time to restore. We didn’t make the Bicentennial, but the sign went up the next year on June 29, 1977.”

The new site that was selected is where the sign stands today, greeting visitors from the middle Yreka exit (775) just west of the freeway. There are 30 pieces to the sign, including 10 letters (five on each side), 20 side filigree panels (10 on each side) and 110 lights (55 on each side). It is made of porcelain enameled steel so it’s not prone to rust, and is what Favero notes is “probably what saved it in the yard.” One of Favero’s favorite details on the sign requires knowing where to look. “If you stand right in the middle of the sign and look up, you can still see the patent for the Federal Electric company on both sides of the E’s.”

Even though these signs were once mass-produced, they are now hard to come by. “There was one I ran across on the internet. It was a drugstore sign that was done vertically instead of horizontally, and it was very small compared to Yreka’s that was selling for $10,000. There are very few of them remaining, so I think it’s a real icon for Yreka.”

Last year, the sign had to go through a second restoration, and the Yreka Enrichment Fund Committee received a McConnell Foundation grant through the Shasta Regional Community Foundation for this, in addition to receiving city help. “The reason we restored the second time is because we’d go by and half the lights were out and the electrical was frayed after 40 years in the hot sun. So now it’s all rewired with LEDs, there are new sockets and it’s all sealed with a bird barrier so the birds can’t get in the sign. The letters, panels and poles have been repainted and the frame powder coated. It looks great.”

Just as it did 103 years ago, Yreka’s lasting “electric spectacular” continues to welcome visitors to town while instilling local pride. “I’m a native Californian and I do like history. And I just have a passion for the sign because I’ve been involved in both restorations, so I just always have to go by and look at it. In fact, the other night I went by and one light was out, so I immediately called Ben Miller, who is the maintenance manager for Yreka Public Works and said, ‘we’ve got a light out!’ And it’s fixed now.” When asked what will happen if the sign needs to be restored again in another 40 years, Favero laughs heartily. “Hopefully, no definitely, I won’t be the one who has to worry about it.”•

To see the sign, take exit 775 of Interstate 5 and go west. You will immediately find it in the little traffic island where Center Street, W. Center Street and E. Miner Street converge. 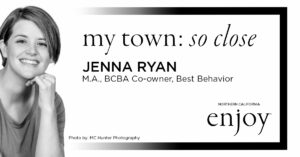 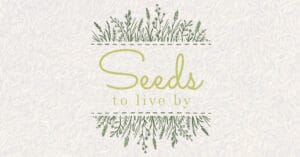 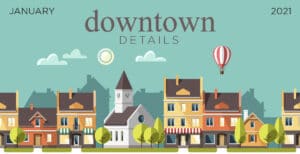