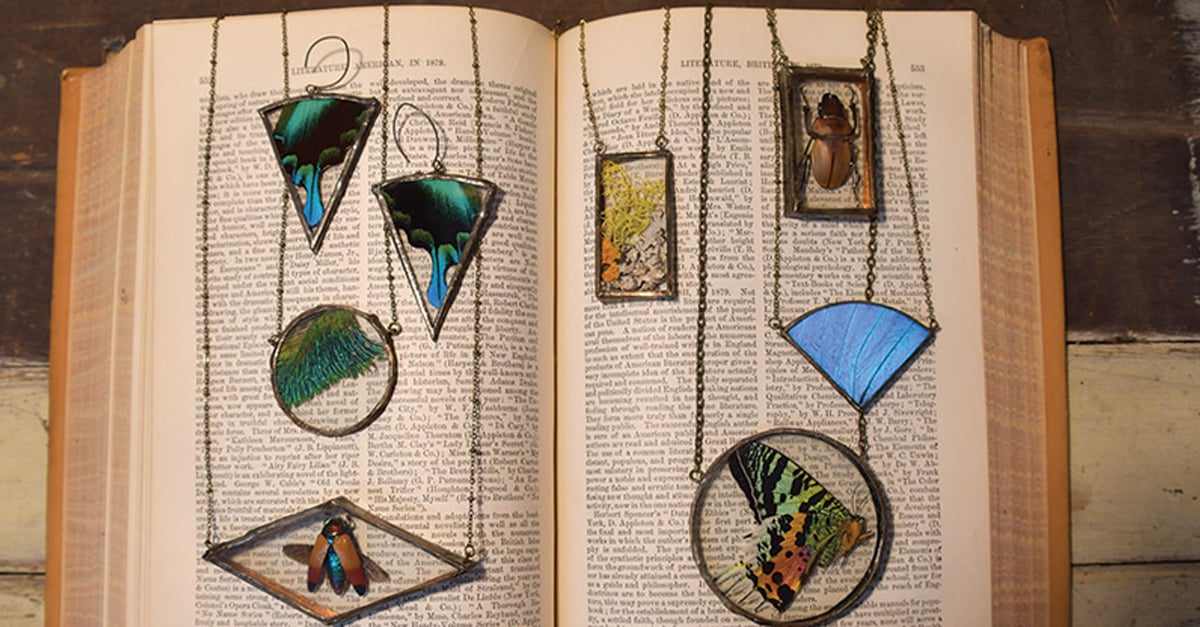 The Bailey Sisters – Artists In Residence

There’s a misconception that to survive as an artist, you must live and work in an urban community – just ask Holly and Mimi Bailey. As sisters, lifelong Siskiyou residents and working artists, they’ve managed to carve out a stable existence for themselves and their families. “Growing up here as an artist, I was told follow your dreams, but have a plan B – like what’s actually going to make you money,” chuckles Mimi.

When she opened her shop on Yreka’s historic Miner Street in 2015, it was nerve-wracking. “For a lot of people, art seems like a luxury, but Siskiyou County is proving that’s not the case.” Holly, who founded her Scott Valley-based jewelry company Waspish Wears in 2012, agrees wholeheartedly. “The community has been incredibly supportive.”

Mimi (pronounced like “Jimmy” with an “M”) is three years older but the sisters have always been close, born into a family that nurtured their creative pursuits. “My mom is an amazing seamstress and my dad does woodworking. He built our house from the ground up,” explains Mimi. Now, Mimi is a painter and owner of the Miner St. Arthouse in Yreka. Having worked with a “little bit of everything,” Mimi’s true passion is doing portraits with watercolors. “With oils, you have to wait months sometimes for it to dry, and I’m just not that patient. With watercolors, there’s instant gratification and they take on a life of their own as they’re drying.”

Unlike the free-flowing landscapes often associated with watercolors, Mimi uses clean lines to create very representational portraits. “I try to make my lines really calculated. The freedom comes in when the watercolor does its own thing.” Recently, Mimi has added local label-maker to her repertoire, designing the “succulent lady” for the instruction pamphlets shipped worldwide by Mountain Crest Gardens, as well as the labels for the Denny Bar Company’s first three limited-edition whiskeys.

Holly, on the other hand, is more about “making stuff.” Mimi jokes that as a child, Holly was “always out making potions with sticks and leaves.” These days, Holly’s interest in the natural world has become transforming found objects – including responsibly harvested bugs – into one-of-a-kind wearables. “I’d go for walks with my son and see lichen everywhere with its awesome colors and textures. We’d bring it home where it would sit on the windowsill and fall apart. So, I started trying to figure out a cool way to preserve it.”

Holly first experimented with resin and then latched on to glass, using an old Tiffany Lamp stained glass technique of cutting two pieces of glass and soldering them together with copper foil, thereby sealing in the object. “The solder is entirely lead-free, and with the copper foil, I’m able to use a lower temperature than, say, people who work with silver, so I can do it quick enough and not burn whatever is on the inside.”

Though they generally work independently, the sisters have collaborated on some projects, like mushroom pendants for the annual Mushroom Festival in McCloud. Mimi sells some of Holly’s jewelry in her shop, and they share a penchant for the macabre, even attending oddities conferences together. They’ve also both discovered their own bread-and-butter niche in commemorative art. For Holly, this means preserving everything from pieces of a wedding dress to bouquets. “I’ve taken a crazy quilt that was falling apart and cut it up and repurposed it for wear for six daughters and nieces, making it usable again instead of just fading away.”

One of Holly’s most memorable pieces involved enshrining a piece of pottery burned during the Carr Fire in Redding of 2018. “One lady had me do a necklace for her sister as a memorial for her house that burned down.” Mimi agrees with Holly, believing these types of commissions are often what elevates art from luxury to necessity for many people. “I’ve done a lot of portraits of animals. Mostly dogs and horses but also a bearded dragon, a snake and a pet rat. I’m also always honored when I’m asked to do portraits for loved ones for memorial services.”

Despite any initial reservations about artist survival in Siskiyou County, the Bailey sisters express excitement about where the local arts economy is headed. Mimi is optimistic about the surge of arts-focused endeavors, like the fourth Friday “Art Hops” events from May to October in downtown Yreka, as well as the many successful brick and mortar establishments like Shoppe Serendipity, Bella Artworks Creative Cafe, the Liberty Arts Gallery and the Rex Club & Empire Room that are all within walking distance of her shop. Mimi remarks, “There’s been a resurgence of support for the arts, and I think it’s going to be what saves us.”  •