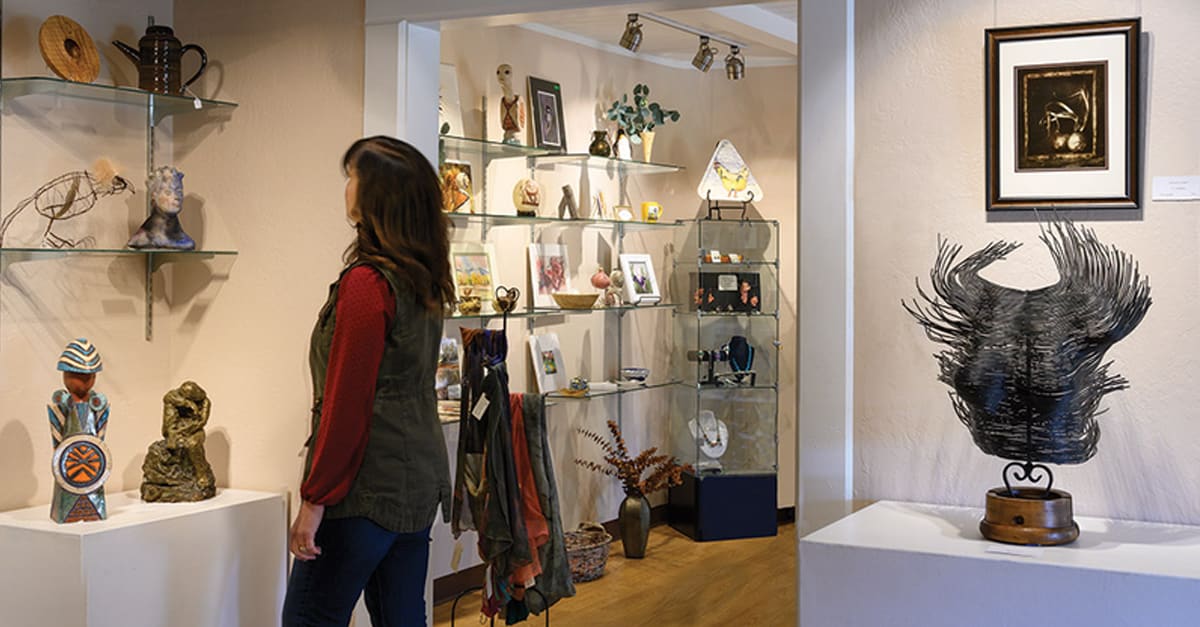 North Valley Art League in Redding encourages the visual arts in various forms – whether the creator is a beginner or an established artist.

“We try to show off the entire membership,” says Carla Canter, vice president of the league.

The league is a community of artists supporting art in the community. The all-volunteer, nonprofit group was launched in 1979 by eight Redding-area artists and now has nearly 300 members.

Initially, members met in each other’s homes. They later got gallery space at Old City Hall in Redding and then relocated to a cottage on Parkview Avenue. In 2004, the league moved into its current digs, Carter House Gallery in Caldwell Park. Built in 1942 as the home for the Harlan Carter family, it later was turned into Carter House Natural Science Museum, a popular place with owls, lizards, snakes, frogs, turtles and a hedgehog among its residents. The city-owned building became available to the art league after Carter House Natural Science Museum merged into Turtle Bay Exploration Park.

“The city has been wonderful. They give us a very good rent,” Bryson says.

The 2,500-square-foot building is surrounded by the Matson-Mowder-Howe Celebration Garden (featuring California native plants) and situated next to the Sacramento River in Caldwell Park.

“This is a beautiful but isolated spot,” Canter says. “So many people who have lived here for many years have no idea that we are here.”

The league would like to change that. It encourages visitors come by to check out the artwork. The gallery is open five days a week and there’s no charge to wander in and look around. Each month the league features a new exhibit of works by members. All mediums are welcome. “Sculpture, woodwork, fabric art, you name it, we have it,” Bryson says.

Artists decide if their works will be strictly for display or also available for sale.

In addition to the monthly shows, the league sponsors three juried shows each year. The National Painting Show draws interest from throughout the country. Last year there were 417 submissions, Bryson notes. The other two juried shows are the Small Painting Show featuring paintings by North State artists and the Regional Photography Show showcasing photographs from Northern California and Southern Oregon photographers. For the juried shows, a professional artist reviews submissions and selects pieces to be on exhibit.

The league hosts regular oil and watercolor painting classes plus art critiques throughout the year. Workshops are held periodically. The league looks for opportunities to challenge artists and introduce new techniques with its workshops; a recent event explored abstract painting on large canvases. “We had 12 women sign up. They took over the gallery with these very empowering, big abstract pieces,” she says.

The league encourages children to explore art, too. Every summer it works with Redding Recreation Department to offer a children’s program with league members leading the lessons. “Children come over and have lessons twice a week,” Canter says. In one session last summer, children made tambourines with paper plates and dried beans.

The league has changed quite a bit over its 40 years.

Originally, the focus was solely painting. Photography, woodworking, ceramics and other three-dimensional art have been added to the mix. Abstract pieces have become more common. Members represent a range of ages and artistic styles as well as experience and training. “The thing that amazes me is that we have so many talented people in the area,” Canter says.

League members can take advantage of a weekly open studio in the gallery. The sunny studio space is a place to create as well as connect with other artists.

Bryson and her husband, Bernie, joined the league in 2011. “It’s funny how over the years the gallery and organization have taken hold of us. We have formed a genuine attachment to North Valley Art League and the many fine people we have met.”

Bryson adds: “Art is another way of informing yourself and expanding yourself.”

Art is essential, Canter says. “It should be part of the fabric of every community.” •

Gallery hours: Tuesday through Saturday, 11 am to 4 pm