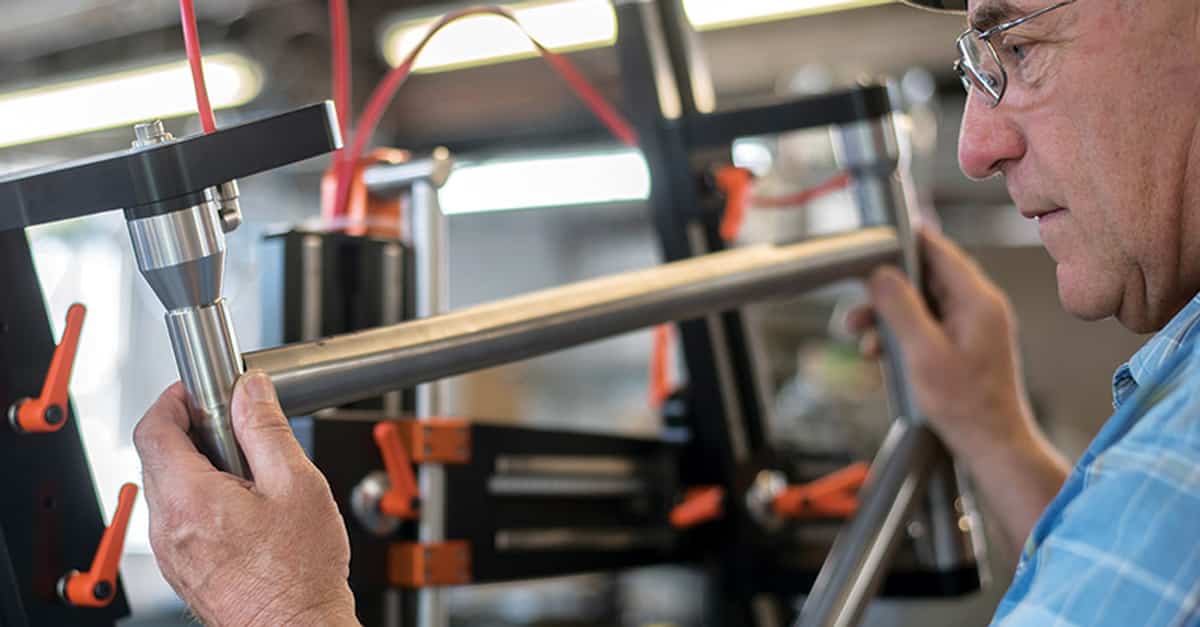 In his novel “Zen and the Art of Motorcycle Maintenance,” author Robert Pirsig writes, “On a motorcycle the frame is gone…you’re in the scene, not just watching it anymore, and the sense of presence is overwhelming.”

Pirsig was describing motorcycles, but it could have just as easily been bicycles – just ask Steve Potts, the world-renowned custom bike builder who moved his shop to Etna three years ago. “People want their bikes to work so well that they disappear under them. They want them to handle well, be safe in the corners and climb well.” And unlike a car where a rider travels in a protected chamber, Potts adds: “On a bike, you’re completely connected to the world.”

Bicycles have always been a part of Potts’ life. He grew up riding on Mount Tamalpais, and the west Marin of his youth felt a lot like Etna does now – a small-town vibe surrounded by wilderness where you can get wonderfully lost “exploring the many creeks, rivers and mountain tops.” Potts built his first bike from discarded parts in the high school metal shop, eventually traveling all over the world on two wheels. For a short while, he made a living as a sheet metal worker and pro motorcycle rider. But ultimately his passion for bicycles overtook him. “I took a cross-country bicycle trip to New Zealand. I rode my bike around both islands and bushwhacked through the Southern Alps and did a lot of fun things. And right then I went, you know, this is just too good. I’m going to do it for a living.” In 1980, Potts turned “100 percent to the bikes.”

“I didn’t know if anybody would even buy a bike from me. I just had to build them,” confesses Potts, which is amusing now since his business thrives almost exclusively on reputation and his contributions to cycling have been memorialized in places like the Marin Museum of Bicycling and the Mountain Bike Hall of Fame. It’s partly because when Potts started, he was doing something unusual: welding titanium. With bike frames, titanium is desirable because it’s lighter and stronger than steel, and stronger than aluminum. It also has high “fatigue strength” – meaning it will just about last forever. The one big drawback to working with titanium, however, is that it’s notoriously difficult. “You can’t fudge it. It’s got to be perfectly clean and mitered with tight joints. It’s got to be purged correctly with the argon gas inside, and all your heat ranges have to be perfect. It’s really fussy.” Potts compares the learning curve to playing the piano, which takes years of practice and dedication. “When you start out playing ‘Chopsticks,’ you try to use all your fingers because there are so many things going on at once.” But as you master it, the flow becomes almost meditative. Potts notes, “Once you get it down, it’s really, really wonderful.”

As bike building has grown more specialized over the years, so have the custom requests. “We just did a bike about two years ago for a lady who rides like crazy all over the world. She wanted a bike with a front generator hub and a GPS charging system, lighting system and a radar system that would detect a car coming day or night, with custom racks from Japan. But the bike also had to come apart so it would fit into a travel box.”

Of course, not every order is so intricate, and Potts likes the direction the market is heading. “It’s going to a more practical phase, and right now I’m building a lot of gravel bikes. People want to be able to ride their bike efficiently on the road and they also want to be able to take it off on a dirt road to get away from cars and explore.”  This year, Potts will build around 40 custom bikes, with a minimum wait time of three to six months. In between custom builds, he also creates components like stems and handlebars for other custom bike makers to incorporate in their builds.

Potts’ connection to Scott Valley itself dates back to 1972, when some childhood friends moved there from Marin.  Potts loved visiting his friends, saying the Valley “always felt like home.” Then, three years ago, Potts took the plunge, relocating permanently to Etna in a search of better work-life balance – no small irony for a man who has steadied most of his life on two wheels.  “Etna feels really authentic and it’s not crowded. You can go anywhere and in minutes be in incredible nature with views that go forever.” Just like the slow-moving backroads of Pirsig’s novel, Potts is grateful to live in a place that’s more about “enjoying the good times” than  “making good time.”  When asked where his favorite bike rides in Scott Valley are, Potts just winks and points to the surrounding mountains.  “Somewhere up there.  But let’s not give away too many secrets.” •