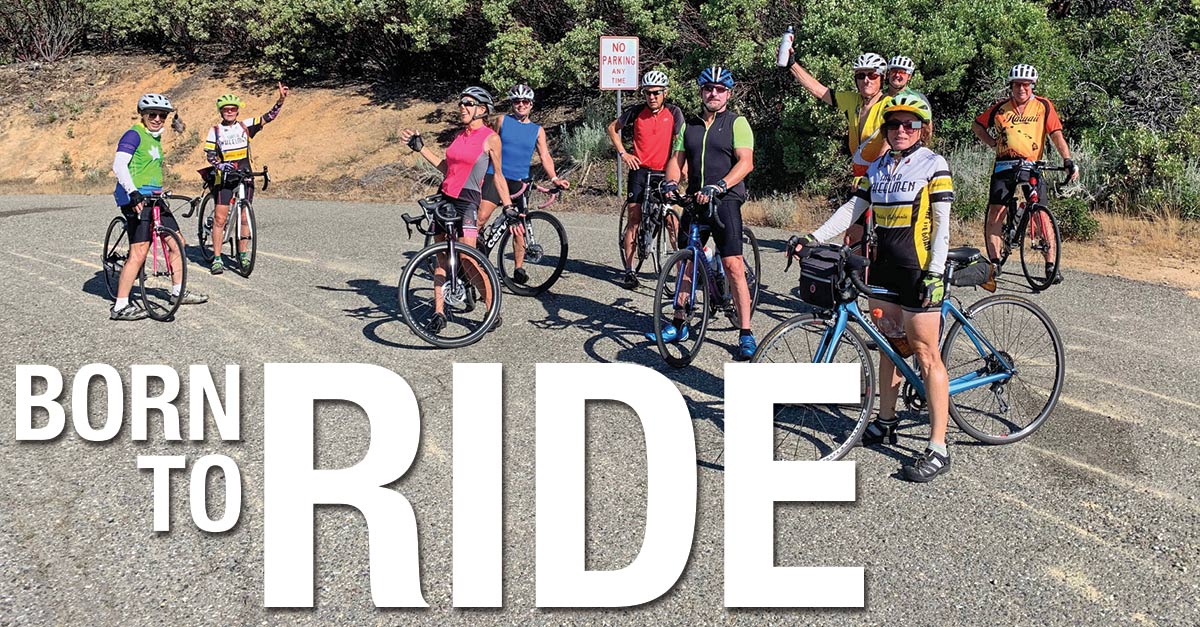 Get in Gear with the Shasta Wheelmen…

The Shasta Wheelmen, Redding’s premiere bicycling club, raced past its half-century mark last year, and is rolling into its next 50 years with renewed vigor. With a membership numbered 110 strong, this group bonded as friends and takes to the roads together nearly every day, following long-ago-mapped routes carefully rated for riders of all abilities.

Lisa Creps, this year’s brand-new club vice president, says the rides are structured to ensure that no one gets left behind. “We know who is going to lead and who is going to sweep the rear,” she assures. “We know where we are going to regroup so we can all get together again. If someone gets a flat tire, we all stop and wait together.”

Riding in a group like this means safety for every rider, especially for women. “I know that feeling. I don’t want to be dropped,” she says. “We never let that happen. We want more women in the club, so we started a women-only ride we call WOW, Women on Wheels.”

That ride, with many others, is listed in The Shasta Wheelmen calendar, which can be downloaded from the club website. In the club newsletter, Matrix, they can read up on fun highlights of last month’s rides and announcements for the next. Serious riders will want to check out the route maps detailing distance and elevation.

Linda Canner, a 10-year member, is one of those serious cyclists, and one with an unusually serious association to the sport. “I met my husband at the top of a hill in San Francisco,” she says. “He was riding up ahead of the group, and he looked back to see how far back everybody else was, and I was right behind him.” She chuckles at the memory. “That was 45 years ago.”

After retiring, she followed him into The Shasta Wheelmen, about three months after he joined the club. “I was tired of just doing yardwork and walking,” she says. “You can go so much further on a bike, and it’s a more leisurely way to work out. For me, it’s an excellent way to maintain health.”

The camaraderie she’s found in the club also really helped with her recovery from cancer. “I lost my hair from the chemo, and I always felt like I was different until I put a helmet on,” she recalls. “Then I felt like everybody else. Riding is a great equalizer. It got me back into a group setting.”

And as good as the ride itself, according to Canner, is the stop where The Shasta Wheelmen gather over coffee. “They see us coming, they brew more,” she says, laughing at the conditioning effect the club has on any favored shop along on a given route. “We love coffee.”

Longtime member John Crowe agrees. “I’m not going to ride unless it ends in coffee,” he says with a smile. With an athletic background that includes 10K runs, light triathlons and double centuries, Crowe’s personal goal for 2021 is to ride a total of 100 miles for each of his years lived. “That’s about 600 miles a month,” he says.

To stay on target, he rarely misses a ride with The Shasta Wheelmen, even those to which he is not officially invited. When the club announced its first Women on Wheels ride, Crowe was told he could not participate unless he wore a skirt. The front page of May’s Matrix shows the result. He showed up and rode his miles while sporting a kilt. “He called our bluff!” wrote Creps.

All three riders express a love for the outdoors, especially in Shasta County. “Riding is different from a car, because you are more exposed to the beauty,” says the VP. “It’s an amazing way to enjoy the area. You are one with the environment.”

Canner loves the sense of freedom that comes from pedaling back roads in rural California. And not just the flat ones. “Give me a hill any day, like all the way up to the dam,” says the cancer survivor. “I’m better on hills than on the flats, and I’ll beat them to the top. But they catch up with me on the way down.”

Crowe, who likes to ride all the way up Lassen Peak, feels liberated by the open road. “I love it. I don’t have to think, not about chores, or anything but riding,” says the retired Record Searchlight reporter. “And the exercise does help, mentally as much as physically. You look at the Wheelmen and we look so much younger than we are. I’m 74.”

During his 16 years with The Shasta Wheelmen, Crowe involved himself in all aspects of the club, including fundraising and advocacy. “I think we’ve been an important voice for biking in general,” he says. “We worked with Shasta Living Streets to get the Diestelhorst trail downtown,” and they are teaming with the California Bicycle Coalition to develop plans for new, safer bike paths in Redding.

VP Creps vows to continue to guide The Shasta Wheelmen along the path of recreation, camaraderie and activism laid by her predecessors. “They’ve given so much to the club over the years,” she says. “I want to honor that. My personal mission is to focus on community outreach so we can grow the membership.”

The club hosts rides for people of all ages and physical abilities. “Most of all, I want to make sure all new members feel welcome,” she says, remembering her first days with the club. “They just opened their arms to me.”

Crowe shares one more benefit of spending so much time on a bicycle. “I feel good about leaving the car home,” he says. “Not for groceries for anything big like that, but as much as I can, what I can fit into a backpack.” He drives maybe once a week and fills the tank once a month. “I get great mileage on my car while it’s sitting in my driveway.” •