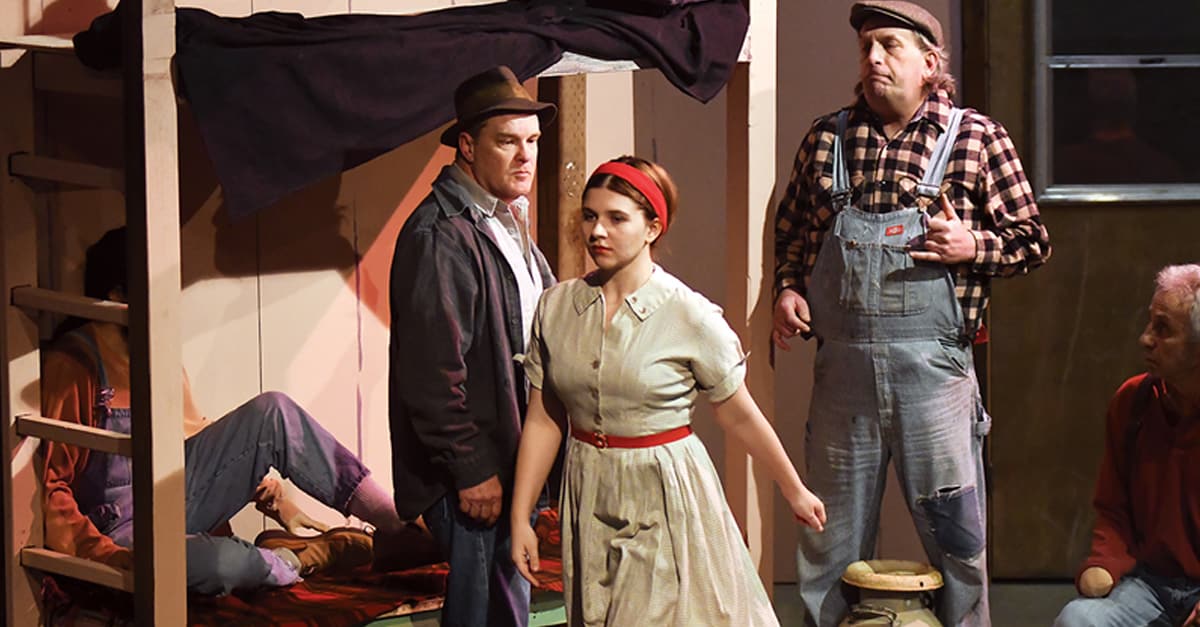 The Benefits Of Community Theatre

The venues may not be Broadway caliber and Hollywood talent scouts may not be hiding in the wings, but when it comes to passion and a mutual celebration of the performing arts, there are few substitutes for community theater.

That’s the view held by many North State theater enthusiasts, including Denise Derk, a playwright and cofounder of the Cottonwood-based Anderson Redding Tehama Scholarship (ARTS) Theatre. “Theater to me is essential,” Derk says. “I think it’s essential for humanity. It promotes understanding and awareness.”

Ken Hill, the CEO and artistic director of Axiom Repertory Theater, says community theater is merely the extension of a storytelling habit that dates back to ancient Greece, if not earlier. “Throughout the ages, storytelling and community have been welded together. I think about Og and Gog sitting around the fire, talking about killing the mastodon, or even religious rituals. We’re trying to communicate the uncommunicable. If I could just say it in a word, I would, so we put them on stage and express them through other ways. More importantly is the word theater itself. It comes from the Greek ‘theatron’ which translates as ‘the seeing place.’ When people come together to see something communally, it has a powerful effect on people.”

Derk agrees: “Theater is an experience like no other. Even the best movie, 10 minutes after you leave, you can barely remember the plot. When you see a real good theatrical performance, it stays with you for years. It brings words on a page to life. It’s a rich and uplifting and inciteful experience unlike any other you can get.”

Darryll Alvey, president of Riverfront Playhouse’s board of directors, saw live theater’s effect in person when he was cast in the Riverfront production of Deborah Brevoort’s “Women of Lockerbie.” The play follows a New Jersey woman searching for her son’s remains following the terrorist attack that brought down an airliner in Lockerbie, Scotland.

“It was one of the more important plays I worked on. Many audience members expressed how powerful it was and how it was a reflection of what they had gone through in expressing grief. They realized they were not alone. It’s part of the human condition. For them, it was a coming together and sharing the human experience,” Alvey said.

Theater also speaks to a community’s vitality, says John Truitt, the director of Viva Downtown Redding and a longstanding contributor to the local theater scene. “I can’t think of anything that indicates a healthy community better than one that has performing arts and embraces it. It indicates the basic needs of a community are being met and it has the resources to do the extra.”

When theater companies like Riverfront, Axiom, ARTS Theatre and the Cascade Theatre produce shows, “it brings us together as Americans,” Truitt says. “It brings together people of different ages and occupations. Once you’re on stage together, you’re all equal. It’s the same with the audience; it makes everybody equal. The type of theater we have now, it comes from the Greeks, and they’re the same ones who invented democracy. I see a lot of that going hand in hand.”

“You’re giving community an opportunity to see something live they may not be able to travel to the city and see. There are a lot of people who don’t travel a lot. Now, it’s even more important than ever to get theater back into the mainstream. It’s an opportunity to expand our minds and expand our thoughts,” she says.

Jennifer Levens, a veteran actor who performed in Riverfront’s first production 40 years ago, says community theater benefits those on stage and behind the curtain with a chance to explore and learn about other talents, and it gives community members a chance to enjoy performances. “It adds to the whole mix of creativity and talent,” she says.

Ian Dalziel, an avid actor, says community theater is a “looking glass into some positive community spirit – something we all assuredly need these days.” Until he realizes a long-held dream “of going to Hollywood and being in them newfangled movin’ picture things,” Dalziel says the stage “has been able to scratch that particular itch. The ability to partake in such a creative collaboration is unmatched in my admittedly limited experience.”

The Redding area’s community theater scene is growing, as evidenced by Axiom Repertory’s new space on Bechelli Lane and the completion of Riverfront’s new theater at 1950 California St. “Everybody is working hard to do better theater,” says Lisa Collins, a multifaceted performer who serves as Axiom Repertory’s vice president. “Competition is healthy.”

As it has on every other element of the community, the COVID-19 pandemic has impacted local theater with canceled or postponed productions. But the curtains will rise again, assures Axiom’s Ken Hill. “Eventually we can resume telling our stories. Like they say in ‘Rocky Horror Picture Show,’ ‘there’s a light in everybody’s life.’ We are light, we are energy, we are storytellers. The day will come again when we are sitting in a dark room telling our stories. We can’t forget that.”