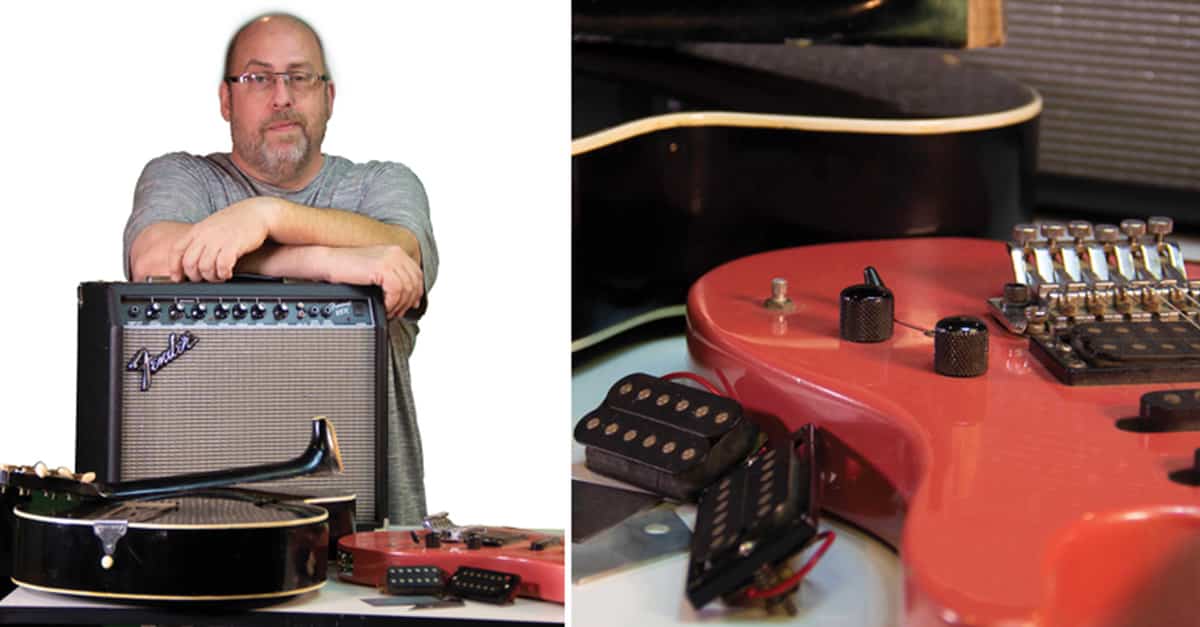 Ty Bos’ Rebuilt Guitars For A Cause

And while family photos and heirlooms will forever remain part of the toll of the Carr Fire, Ty Bos hopes his gesture can help heal the losses from our community’s biggest natural disaster. Bos, who runs Outlander Creative Inc., a Redding advertising/marketing/video/graphic design agency, rebuilds guitars for children who lost theirs in the July 2018 blaze.

He said with all that was lost in the fire, a guitar might seem small potatoes, but to a kid it’s a bigger deal than most would think. “In the grand scheme, replacing a guitar isn’t high priority, but I think the kids’ needs are usually last in things after a disaster,” he says. “Obviously, finding a place to live, furniture and things like appliances are going to come first. And adults, if they want something, they typically have the means to go and buy it. Kids are kind of at the mercy of what’s left.”

And that’s why Bos put out feelers on Facebook seeking not only kids who’d lost guitars in the fire, but people who might have an old axe lying around – working or otherwise. “I just really wanted to be able to something special for the kids,” he says. “Fire is such a devastatingly permanent thing.”

The son of an advertising executive, Bos lived a nomadic life until he moved to the North State as a freshman in 1982. It became home. “I love Redding,” he says. “It’s a cool city with its ups and downs.”

Three years of woodshop and an innate desire to tinker led Bos to build his first guitar in high school. “I built it out of  parts,” he says. “It was an abomination, but it played correctly.” To date, he’s taken in seven guitars – five electric and two acoustic – refurbished them and found them homes.

“I take what I can get,” he says. “A school teacher gave me a six-string Ovation. Three were complete rebuilds.” Bos said depending on the level of work a guitar needs, he can take it from parts to playing in a matter of days or weeks, and once he sees it he’s got a vision of how it will turn out. “Some go quick depending on my brain and schedule,” he says.

A “musical Agnostic,” Bos is self-taught and remembers his upbringing via music. “I’ll go anywhere from Patsy Cline to Nine Inch Nails,” he jokes, “and music was always a way to remind me where I lived – I remember certain places by what the music was at the time.”

And because he loves music, Bos says giving refurbished guitars to children affected by the Carr Fire is the least he can do. “It’s emotional,” he says about seeing the faces of children on the receiving end of a guitar. Bos remembers a girl who claimed what he thought was going to be his most difficult guitar – a left-handed 12-string one. “She was amazing,” he says. “I wouldn’t be surprised to see her playing coffee shops.”

Bos said he knows there will come a day when no more Carr Fire victims will need guitars and, perhaps, he’ll turn his passion for giving to children whose families are simply unable to afford them. “I love building guitars,” he says, “but I love being able to give someone music more.”