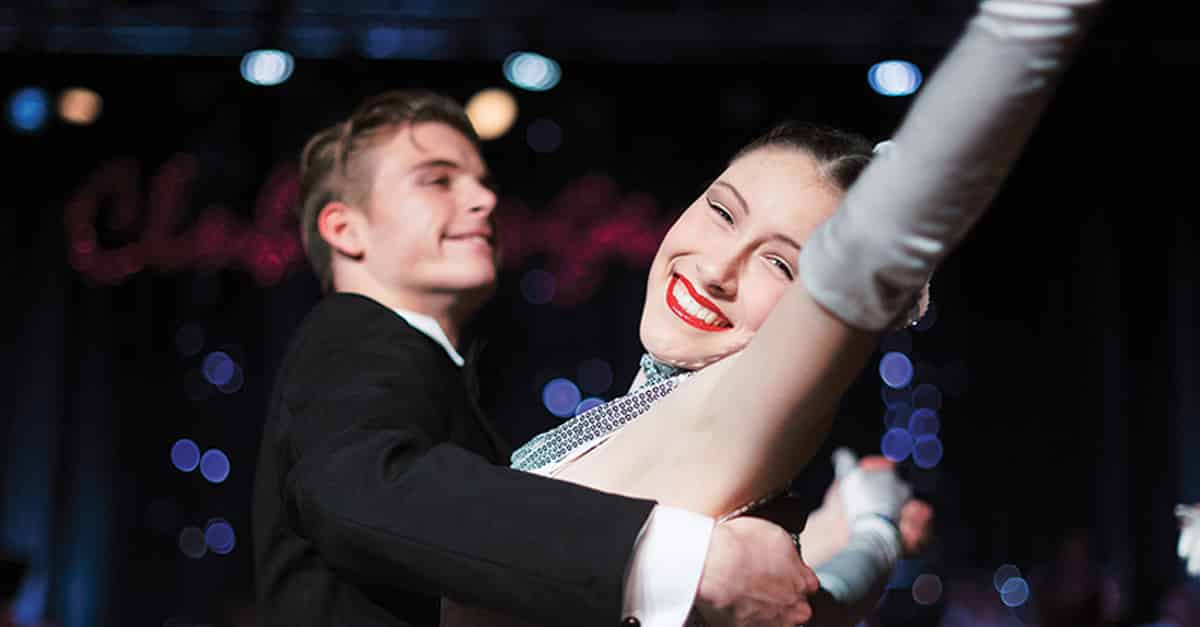 An Evening At Club Cougar

Foothill high’s music, dance and drama students are turning back the clock nearly a century to a time when swing was the thing and the Big Band sound ruled America’s airwaves and dance floors.

These teenaged time travelers have set the dial for the ’30s and ’40s (think Count Basie, Duke Ellington, Benny Goodman and the other jazz greats) and programmed the GPS to find a classic nightclub in Chicago. The best part is they’ve invited adventure seekers to come along.

All the fun can be distilled down to two words: Club Cougar. Now in its 26th year, Club Cougar is dinner, dancing, music and a show all rolled into eight entertaining evenings.

Foothill High music teacher Mitch Bahr, who’s gearing up for his 18th straight Club Cougar, credits the show with transforming his students into full-fledged musicians. “It teaches discipline. It teaches kids how to train like a professional musician – how to bring it every night. There can be no ‘off’ night, no phrases missed. It’s much like being in Los Angeles in the pit working a Broadway show where you’re on every night. It builds a lot of grit,” Bahr says.

Cameron Sewell-Snyder, a senior who has been a part of Club Cougar during all four of his years at Foothill, agrees and adds that the hard work also makes it fun. “The best parts are being with your friends and playing,” the 17-year-old tenor sax player says. Another plus: “Having a good time and that sense of community. Basically, just working with everyone to put the show together … your friends, the cast members … just putting on the best show possible,” Sewell-Snyder says.

Kelley Sewell, the young jazzman’s mother, says the music is a big part of the Club Cougar experience. The dancing, to choreography by Kathy Babcock, “is just as big a part. The band, the dancers and the play. I call it the trifecta of entertainment. It’s a very professional production,” Sewell says.

Natalie Hendrickson, Foothill’s drama teacher, credits her students for the Club Cougar script. “I put together a plot and a character breakdown and they (her fourth-year drama students) write it over the summer.”

This year’s production stars Foothill students in a show with a baseball theme. New York-based philanthropist Millicent Hearst arrives in Chicago to host a charity event to be highlighted by the auction of a baseball signed by members of the New York Yankees (the Yanks had just beat the Chicago Cubs in the 1932 World Series).

In addition to ballplayers like Joe DiMaggio, Lefty Gomez and Gabby “Old Tomato Face” Hartnett, the play features Kenesaw Mountain Landis, the famous baseball commissioner, and his wife Winifred, who are on hand to make sure everything is on the up and up. “There’s a fun activity within the script where they even pull someone in from the audience to do the ‘Who’s on First?’ routine,” says Hendrickson, referring to the classic Abbott and Costello bit.

Proceeds from Club Cougar help support the drama department’s fall production and covers the bus fare for a field trip to the Oregon Shakespeare Festival in Ashland, Hendrickson says.

Club Cougar also supports the unyielding appreciation of a truly American musical style, Bahr says. Five or six years ago, Bahr says he asked his students if they’d like to set Club Cougar ahead a couple of decades, “maybe a ‘70s club, with more disco and Motown. I thought they’d be jumping out of their seats, but the kids said, ‘We love learning about the roots of jazz. We love the melodies, the tradition.’

“When people hear Big Band music, they’re reminiscent of older times. It’s sophisticated, which is refreshing. Most people who come say, ‘Wow, we don’t listen to music like this anymore.’ And the dancers really appreciate it. By playing it correctly and now blowing it off, we show respect to that generation,” Bahr says.

Playing his sax on Big Band classics like “In the Mood,” “Sing, Sing, Sing” and “American Patrol” is why Cameron Sewell-Snyder wanted to join the Club Cougar orchestra, he says. That “and the desire to be in the top jazz band at school.” •

Redding First Church of the Nazarene,

$55, Fridays and Saturdays; available at the