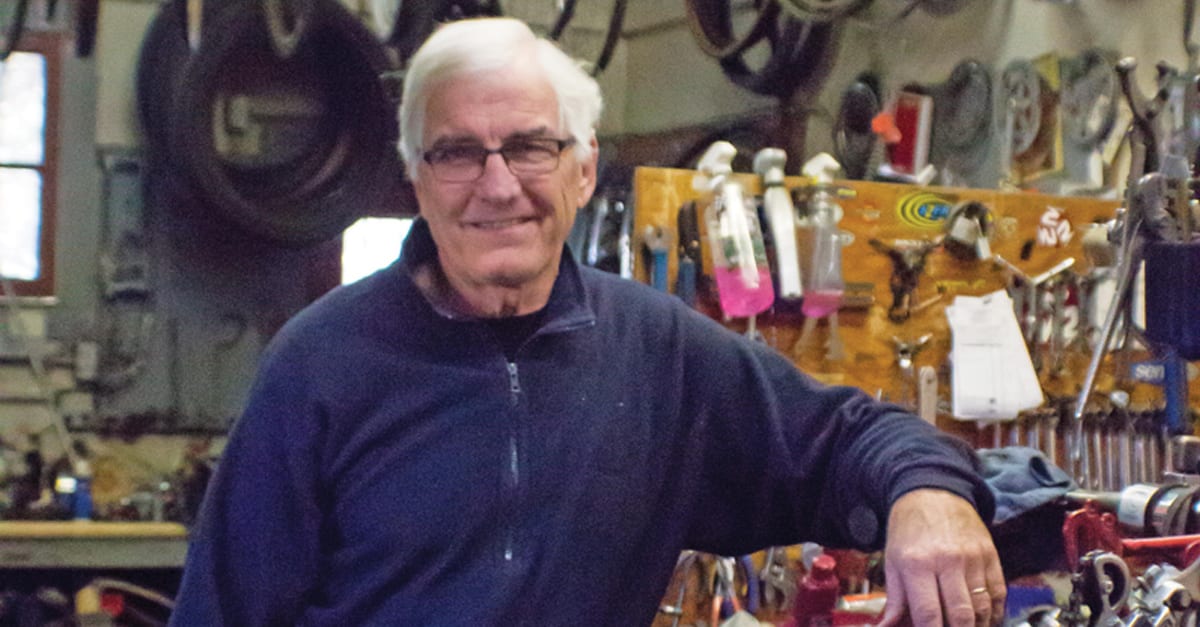 Pullins Cyclery owner Steve O’Bryan is the first to admit, “Our bike store is funky and disorganized.” He also takes pride in the fact that his shop, a Chico institution since 1918, has been named Best of Chico 24 years in a row.

“If you want your bicycle serviced and repaired for a decent price, we’re the place. And we don’t discriminate,” he says. He and his team are as happy to work on a bike from a big-box store as they are a multi-thousand dollar bike imported from Europe or Japan.

O’Bryan recognizes his place in Chico bicycle history, noting that “it’s been a bike town forever, since the late 1890s.” He purchased Pullins from its original owner, Vern Pullins, whom he still reverently refers to as Mr. Pullins, in 1984, after starting out as a high school employee in 1971. Mr. Pullins was 88 years old when he sold his shop, now the oldest bike shop north of Sacramento. “It’s been Pullins since 1918. Before that, around 1905 or so, it was called The Junction.”

“There were plenty of people in line for it, but he sold it to us because we wanted to keep it Pullins and keep it the way it was,” says O’Bryan. He laughs that he and a friend were recruited to work at Pullins after the owner took note of how often the boys were riding their bikes to his shop to buy parts for the bike repair work they were taking in from a home garage. Work at Pullins didn’t bring in nearly as much money as their own entrepreneurial endeavor, but paid off in other ways, namely being at the heart of the town’s bicycle boom that had started in the late 1960s.

“It was part of the environmental movement, probably also driven by the anti-government movement. Self-propelled transportation was just a thing,” he says. “Ten-speed bicycles became available and they were hugely popular.” Eddy Merckx, the great Belgian cyclist, had also captured the nation’s attention for his many record-breaking runs. “There was a lot of bike riding going on in Chico.”

A Pleasant Valley High School student when he started at Pullins, O’Bryan benefited from the store’s downtown location introducing him to students from Chico High as well as Chico’s iconic businessmen of the day. “I was in my teens but still got to hang out with these guys,” he says. “It was fun working for Pullins. He was a very interesting guy. I used to pal around with him and all his friends.”

Eventually he’d join up with other cycling enthusiasts, including beloved Chico Bicycle owner Ed McLaughlin, to strengthen Chico Velo, a bike club which organizes group rides and does bicycle advocacy. “There was a time when every board and commission in Chico had a member of Chico Velo,” he says, noting that the advocacy created infrastructure that makes the town a safe and fun place to ride. O’Bryan himself has served on the Bicycle Advisory Committee for the City of Chico for three decades now.

Today’s bicycle trends include an interest in used bikes, which Pullins keeps in stock. “People are kind of discouraged to ride around on a nice, pretty new bike because they are a target for thieves,” he says. “Older bikes are still quality.” Recent import tariffs have also raised the price of popular European and Japanese bikes, making people seek out used versions of the brands they favor. “Because this is a bike town there are a lot of used bikes around,” he says.

O’Bryan runs the shop with wife Katy, who also owns Katy’s House Daycare. He also hosts a weekly Celtic music show on community radio station KZFR and enjoys booking live Celtic music shows in the area. On February 1, he is producing Scottish musicians Jim and Susie Malcolm at the ARC Pavilion in Chico. Tickets are available through Pullins Cyclery.