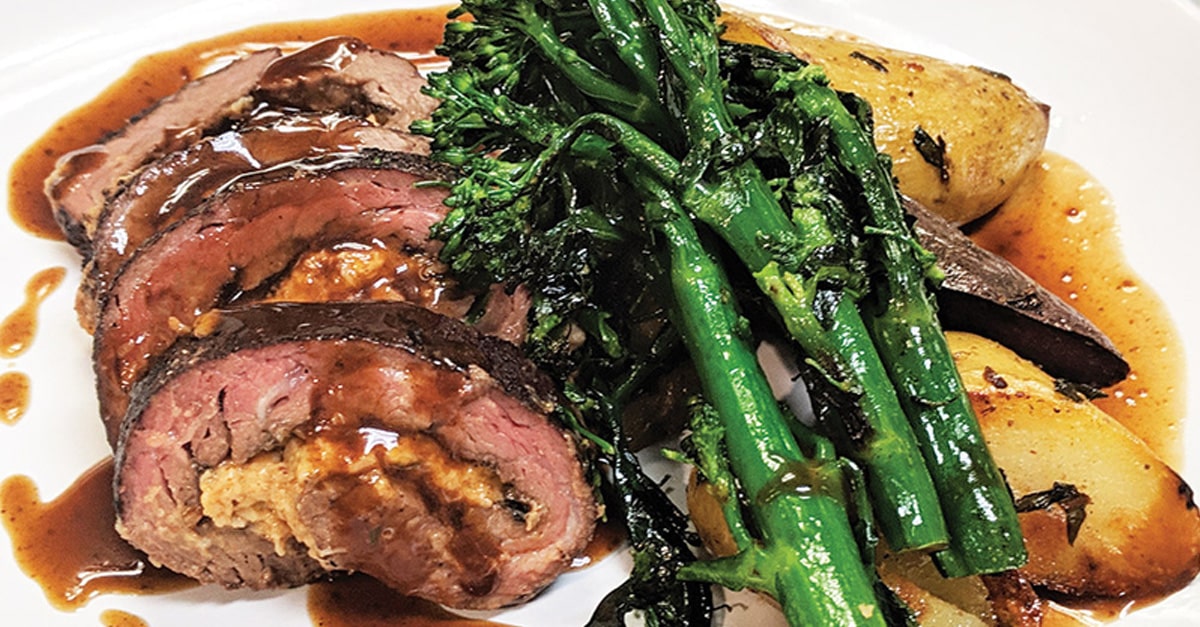 How many people can pinpoint a distant childhood memory as having planted the seed that grew into a lifelong passion? Anderson caterer Christian Bachman can, though many of us might call the first memories of a 25-year-old not so distant. Still, he can look back a couple of decades to a moment that set his destiny.

“I was 3 years old and it was like I couldn’t eat anything because of food allergies,” he recalls. “It felt like I was allergic to everything.” Having to eat a restricted diet as a child was bad enough, but the table being loaded with good food when he sat down to eat with his parents and four older brothers made things even worse.

That changed after his mother took him to a holistic doctor. “I ate nothing but braised lamb and sweet potatoes for nine months,” he says. “It was a detox diet, and it worked. I went from being allergic to 32 ingredients to just bananas. That’s it. It was like, I see all this food and I can’t eat it. And then I can.”

From that point on, the boy was all about food, cooking for family and friends. “I don’t know if it was any good, because nobody had taught me how to cook yet,” he says. When he grew up, he found himself a teacher. And then another, and another.

Today, he owns and manages Bachman’s Wholesome Catering Co., with an emphasis on everything made from scratch. Whether grilling chicken on-site for church volunteers on his mobile rig  or taking over the Elks Lodge kitchen to serve more than 200 high school alumni celebrating their 50th class reunion, Bachman says he puts in the time, work and expertise to make even the simplest dish memorable.

“I started the pork at 2 am and I was sleeping while it cooked,” he says of the pulled pork now warming in his rig’s 700-pound oven. “You have to slow cook it long enough to break down the collagen, for about 10 hours. For the chicken, I made a marinade from scratch: white wine, garlic oil and thyme from my garden.”

Another unusual thing about this caterer is his extensive knowledge of food. Trained by experts in the food service industry, he sounds like a sous chef who caters. For example, he knows how to balance flavor across all four taste buds. “With your first bite, you get a first flavor. Four chews later, it’s different,” he says. “And it’s not just taste. I indulge all five senses.”

OK, smell, touch – and sure, sight, as in presentation – but sound? “I listen to the food as I cook it,” he answers instantly. “You want it to have just the right crunch.”

The boy who couldn’t eat – and then could – grew up focused on a chef’s career, tolerating high school only as long as he had to. He dropped out at 16 and went to work in food service, over the next three years cooking in local kitchens at Outback Steakhouse, View 202 and The Stirring Cafe.

“I just fell in love with it,” he says. “I worked 70-80 hours a week. You need the work hours to become valuable as a chef. When I was 19, I took a shot at culinary school. They gave me a book and a really expensive lab fee. I lasted one semester. I learned more by working and reading the book on my own.”

Bachman polished his culinary education by targeting a posh vineyard resort in Sonoma County. He worked his way up to sous chef.

“You have to be able to lead and teach,” he says. “You have to be able to recognize a cook a chef can rely on.” After returning to Redding, he took over the kitchen at ShiningCare’s tea house, cooking from scratch on site and catering his own menu. Business grew so fast that within six months he needed a larger kitchen. Two years ago, he launched Bachman’s Wholesome Catering Co.

Throughout the last seven years of this culinary saga, Bachman’s wife, Monique, watched the transformation from cooking enthusiast to sous chef. Along the way, she tasted the fruits of his best labor. “I’m a really picky eater. If it’s not cooked perfectly, I won’t eat it,” she says. “We’ve been together nine years. He’s learned my taste buds. He gets it right every time.”

Bachman says last week he worked 100 hours. This week, he and his four employees fed the Shasta High School Class of ‘69. He sees his catering service as a contribution to his community, literally serving the people. He wants to do more, eventually opening a place of his own, and he feels he’s well on his way.

“I want to open a restaurant with a new kind of hospitality, like my grandma’s,” he says. “She is an excellent cook, and she brings the family together over food. I think my passion for food and hospitality stems from her. I believe the best times in life are oftentimes shared over the dining table.” •