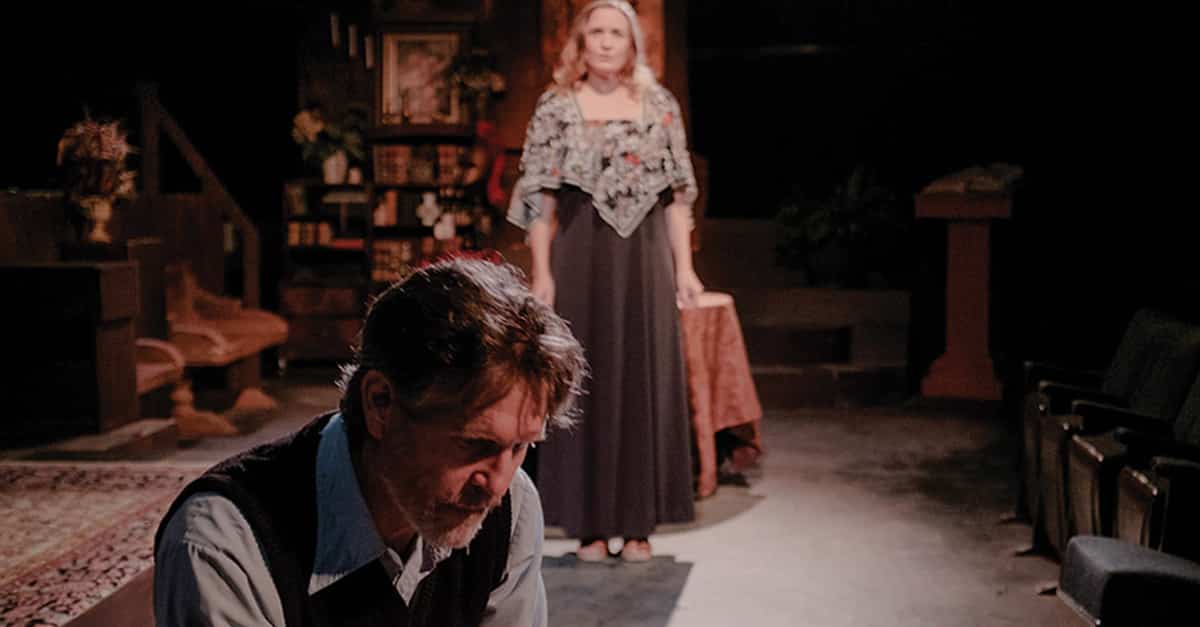 The Blue Room Theatre In Chico

Sitting kitty-corner to the southeastern end of the Chico State University campus above Collier Hardware, the intimate 126-seat Blue Room Theatre has been delighting audiences with creative, entertaining live performances since 1994.

It all started when brothers and Chico High School graduates Dylan and Denver Latimer began putting on avant-garde acts in their parents’ backyard called The Butcher Shop Show. People who were around at that time agreed that the quirky and off-the-wall plays were a good excuse to sip on an adult beverage and watch experimental theater. Then in late 1993, the Latimers began raising money to finance a permanent theatre that was not out of their parents’ garage. Fortunately, they caught wind of a space becoming available above Collier Hardware and started renting it out.

Flash forward to 2004 and what is now called the Blue Room Theatre was picking up steam – all the showings of “Hedwig and the Angry Inch” were sold out. The musical rock show was funny, inclusive, clever and featured many well-known Chicoans. Even now, it is considered the top-grossing show in the theatre’s history, prompting the Blue Room to bring the production back in 2014 with all the original cast and crew in a commemorative rerun.

“That was one of my favorite audience experiences, and then when we did it 10 years later it was really great,” says Blue Room Managing Director Amber Miller. However, over the decades since the Blue Room’s inception, the space has gone through several changes – in management, usage and support. The Latimers first called the

Blue Room the Cosmic Travel Agency and then the Chico Creek Theatre Festival, then it became a masonic hall, and laid vacant for a while. In the early 2000s, the brothers had moved on to other ventures, but luckily local theater aficionado Joe Hilsee came in and became artistic director.

The theatre has been able to remain in its current space and has continued to put on Main Stage and late-night shows funded through donations and the Guild – a program that gives members season-long access to Main Stage performances and opening weekend parties.

Miller, who has been involved with the Blue Room since 1996 when she was a student at Chico State and landed a role in a “Twilight Zone” play, became managing director in 2015. She does set design and a few other roles, being involved in more than 100 productions over the years. Her favorite part of directing is making it all come together.

“I love the collaboration, getting into the space and using the resources we have, then coming out on the other side of it. And I get to sit back, watch it and go home, whereas as an actor you don’t ever get to watch the play,” she says.

Miller adds that the Blue Room strives to bring in performances that are contemporary, relevant and edgy that include some chestnuts of truth. And at a time when technology and mobile devices are stealing people’s attention, some live interaction and no-cell-phones-allowed entertainment can be a welcome respite.

“Live theatre is important as our society is getting more isolated with everyone and their phones. But here you don’t have that. This is mixing visual art and people. Sitting in the audience and all that energy – sharing that experience together is exciting,” Miller says.

The Blue Room Theatre can open as early as September and host performances through June. Joe Hilsee and Amber Miller were excited to kick off the season with “The Haunted,” which ran from October 3-19 and is an adaptation from the novel by Shirley Jackson. Also keep an eye out for the “Santaland Diaries” coming in December, “Measure for Measure” written by William Shakespeare to be performed live in January, various monologues throughout the season and other plays written and directed by locals. •The Blue Room • 139 W. First St., Chico • www.blueroomtheatre.com