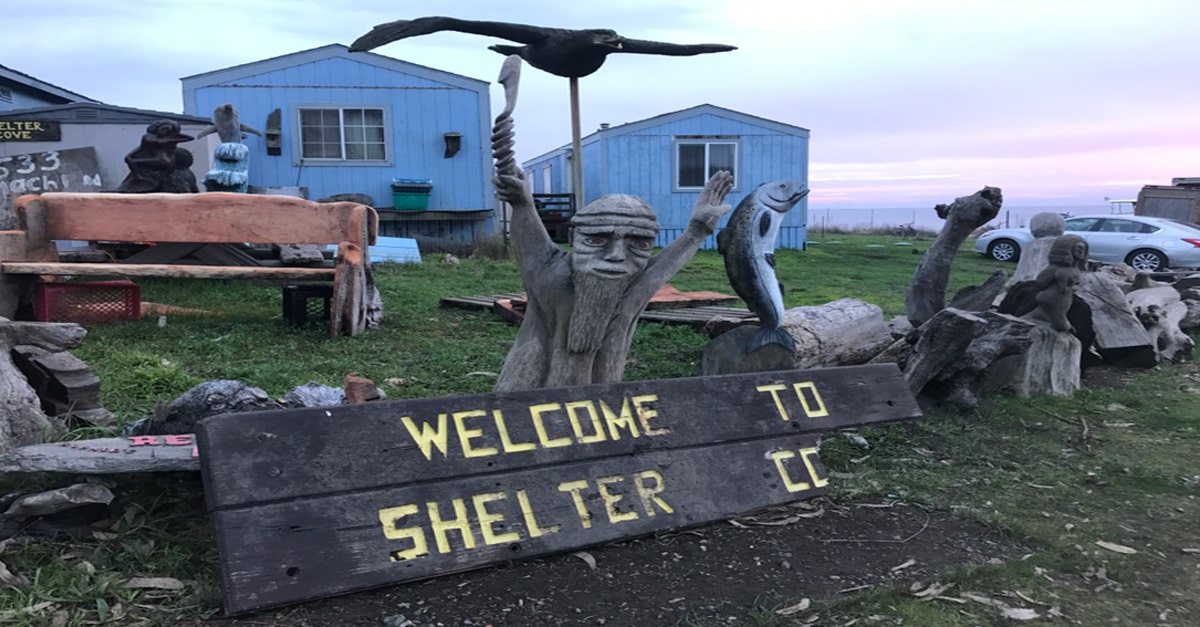 The Seaside Community Of Shelter Cove…

One does not get to Shelter Cove by accident. The final stretch of the drive is only 21 miles, but it can feel like 2,100 miles as you snake your way up from Highway 101, around, up, over and down the King Range before landing at the southern end of California’s fabled Lost Coast.

The payoff, though, is worth the travel’s travails: the hairpin turns and potholes are quickly forgotten upon arriving at this hidden gem of a seaside community. Shelter Cove proudly wears its isolation like a badge while offering a warm welcome to wayfarers.

“It never gets old,” says Justin Robbins, whose nine years in the cove is the longest he’s lived anywhere. “It’s so beautiful and mesmerizing. This place teaches you about fragility and resilience. Often in the same day.”

After a career in public lands management that included six with the Bureau of Land Management on the 68,000-acre King Range National Conservation Area, Robbins now serves as the general manager of the Resort Improvement District, the agency that provides utilities, emergency services and recreational programs for Shelter Cove residents.

Robbins is happy to talk about Shelter Cove’s amenities – including a 9-hole golf course, an airstrip, a community clubhouse, children’s library and a 1,200-acre greenbelt – but passion charges his voice when he brings up the area’s natural resources.

His forested hillside home 1,000 feet above sea level is “surrounded by a wildlife park,” Robbins says, and he can frequently hear sea lions barking. He’s also a hop, skip and a jump away from tidepools and coastal prairies. “I’ve never lived or worked in a place with the amount and diversity of wildlife we have. The cove is totally surrounded by public lands. It’s a gateway to the King Range and the Lost Coast Trail. We want everybody to come here and experience it. Come see it. The public lands belong to everybody.”

The first to experience the area were the Sinkyone and Mattole peoples who were drawn to the abundant sea life. Spanish galleons returning from China in the 1500s would hug the coast while experiencing northwest winds and would find shelter and safe anchorage in the cove, according to Mario Machi’s narrative history, “Gem of the Lost Coast.”

Settlers, attracted by Shelter Cove’s lush pastures, brought cattle to graze in the mid-1800s and soon commenced establishing the cove’s standing as a port of call for the deep-water steamers sailing between Eureka and San Francisco.

Shelter Cove’s status as a shipping center began to slip in the 1930s when an ambitious 960-foot pier, built in 1885, crumbled into the sea as the bustling trade of tanoak bark extract ended. Its focus as a commercial salmon fishing port continued though, with each day’s catch trucked to markets in San Francisco.

Salmon fishing fills a big part of Mary Ann Machi’s childhood memories of Shelter Cove. Her father, Tony, joined her uncles Mario and Babe in working for a fish company partly owned by her grandfather, Pietro “Pop” Machi. As a child in the 1950s, Mary Ann’s earliest recollections are of Shelter Cove’s beauty and the hours of fun playing on the beach, exploring tidepools and “roaming around having kid fun.”

The Machi brothers returned to Shelter Cove after World War II and soon acquired the 40 acres that includes the present-day marina and campground. The brothers refurbished an old hotel, opened a café and launched a boat rental business.

“Salmon was the thing. It was fun to look out over the cove and count how many commercial boats were out there. There would be upwards of 100 or more,” Mary Ann says. By the 1950s and 1960s, salmon were being sent to the Tom Lazio Fish Co. in Eureka.

The fishing attracted Rodney Morris to the cove in 1965, working with his dad in Mario Machi’s “Mosquito Fleet,” and by 1979 he was a full-time commercial fisherman. He currently works with his son Jared, the captain of the C’Mon sportfishing boat, and proudly estimates that he spends more time on the ocean than he does on land.

For Fair Oaks resident and avid golfer Burke Adrian, who shares a second home in Shelter Cove with his wife, Pam, it’s the golf course that makes the cove stand out. “You are isolated with very few worldly resources except the stunning views and cheap golf,” Burke says. “Being a golfer, I really don’t think there’s any place like it on the entire West Coast that approximates Scottish links-style golf. And it’s in a rough form that makes it a real test.”

For Pam Adrian, it’s the family history. A native of Miranda (a small town on the Avenue of the Giants), she says her grandfather would use a pack mule to bring tanoak and wool from Miranda to Shelter Cove. As a child, every holiday involved a visit to Shelter Cove and in 1988 her father built a two-bedroom home in the cove.

It remains a small community with an official population count of 809, but modern-day amenities have made their way to Shelter Cove, including the Gyppo Ale Mill, a popular brewpub, and Mi Mochima, a Venezuelan restaurant.

“It’s a community of special people and a special place. You really have to be wanting this lifestyle and environment to be here,” Robbins says. “The landscape is giving, but it certainly takes too.”