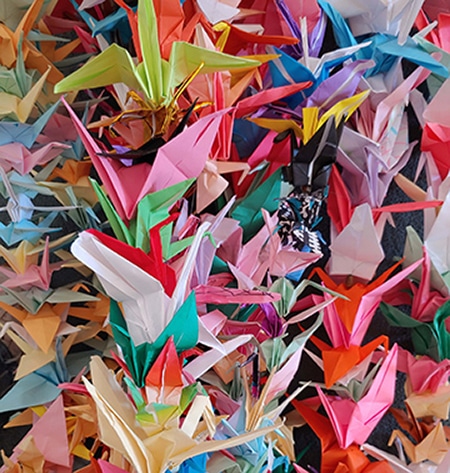 With the theme of Peace, the Main Even Gallery presents the special “1,000 Origami Cranes display,” created by the students of Manton School and their teacher Catherine Mancino. Sponsored by the Tehama County Arts Council, the display will run through February 1, 710 Main Street, Red Bluff. Gallery. Hours are Thursday-Saturday, 11 am – 5 pm.

According to Mancino, It began as a project back in 2016 when her class decided to perform the play, “1,000 Cranes,” for their annual holiday show with their 4th-8th graders. The story of the cranes was based on a true story about a two-year-old girl, Sadako Sasaki who lived in Hiroshma, Japan when atom bombs were dropped there at the end of WWII.

Sadako became ill years later from the radiation. While in the hospital, Sadako learned of the legend of the cranes, that if you folded 1,000 paper cranes your wish would come true. She and her friends collected paper and set out to fold the 1,000 cranes hoping her wish to get well would come true. Unfortunately, they were only able to fold 644 cranes before her death. Her friends completed the 1,000 cranes in her honor. A memorial statue commemorating Sadako Sasaki exists in Hiroshima, Japan. The inscription at the base of the Statue reads: “This is our cry, this is our prayer, Peace On earth.”